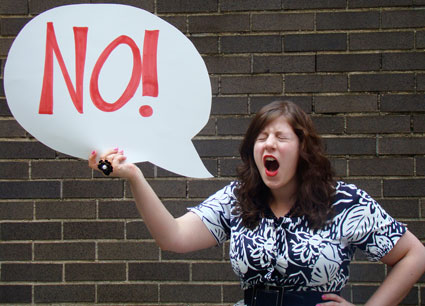 Do you get tongue tied very time you open your mouth to say ‘No’? Does your quest to make others happy drive you insane and despite your level of extreme frustration you still can’t get yourself to choose your own comfort over others?

Well, you’re not the only one! So many people not very unlike you face the same dilemma. They feel that by saying ‘No’ they will sound selfish and arrogant and hurt others emotionally – so not true! It’s time to shun the habit of lying to ourselves, of always putting others before us and always feeling frustrated and agitated in our heads.

Here is a quick guide to learn the art of say the magic word that can make you a much happier person!

1. “I can’t commit, there are so many other things going on.”

When you say ‘No’ by explaining that you can’t commit and in the same breath also explain the reason for your inability to commit, you not just sound polite but also enable the requester to empathize with you.

By saying this, you aren’t out rightly refusing but instead adjusting the request according to your own schedule so that you don’t feel over burdened.

This way you subtly inform the other person that you might not respond in the affirmative. This not only mentally prepares the other person but also buys you time to think over all the details before reaching a final decision.

This is one of the best ways to say “No” because one, you are not getting yourself into something that you might not be able to (or want to) do and two because you are guiding the other person in the direction of someone else who can be more helpful.

This might sound like the most difficult way to turn someone down but if you can force yourself to be up front with a simple “No” once, you’ll never be afraid to say it again!

Remember, the world won’t end and the sky won’t fall if you say “Yes” to yourself every now and then by saying “No” to others.

QB With Another Smashing Hit!!

MUSIC NOT SO MAGICAL

Why to love Lady Gaga?

Lets do the hair!!